Recently, D'Ma wrote a post on looking for community now that she is no longer part of her former church. The loss of community following deconversion seems to be the most painful part of the experience. I've been thinking about this a great deal lately as I attempt to enter a new congregation and assimilate. I have found small reasons to be hopeful that I will find a place there, though there are moments I feel it may be a matter of time before the discomfort of the poor fit grows too large to ignore. I often ask myself "Why?" Why am I going, week after week? I don't always answer myself. However, a week ago, I became more aware of my motivations during a workshop I attended where I learned a new form of therapy. The therapy is called EMDR and involves helping people process memories and the beliefs related to them, particularly those of a traumatic nature. There's some free association involved, which can take on a dream-like quality at times. The participants of the workshop practiced the therapy on each other. (That way we can mess each other up instead of our clients :) I chose to process a memory that was not traumatic, though it still pained me. It was related to my dad so I didn't anticipate addressing my faith crisis at all. However, during EMDR I was hit with the realization that I am partially holding onto Christianity as a way to hold on to my dad, who died 5 years ago. By maintaining the faith he passed on to me, I continue to have a sense of connection to him, despite his death. Community and connections mean so very much, don't they? Death isn't always strong enough to dissolve them. During the EMDR, I also experienced some vivid imagery that I thought I'd describe to you. It felt very much like dreaming. Feel free to draw your own conclusions about it and share how it might relate to your own experiences.

I found myself standing by several pools of water, intended as baptistries. My family stood nearby. I told them, "I have to go now." I walked away from the pools of water, toward a road. Abruptly, the scenery changed from a warm, green land to a frozen wasteland, as I approached the road. I stood at the beginning of the road and looked out at the snow covered land in front of me. My husband stood by the edge of the road, which I was relieved to see. I also saw dark silhouettes of people framing the road. I even saw my family slowly walking over towards us. I looked back and saw the sun shining over the pools of water. I said, "I wish the sun could come over here." Someone behind me said, "The sun can't come over here." Then I felt a warm fur coat being draped over me. I was told, "you can be kept warm with this." I still wanted the sun shining over us, but I turned and we all walked away from the water. I asked, "Is there any green here?" I wanted to see some grass, but I could only see snow. I remember being amused that some  penguins waddled across our path. Dagoods spoke up and said, "Why don't we all go skiing?" (Just like him to suggest an athletic activity). We all skied, though I finally said, "I'm still cold." Someone suggested we go drink hot chocolate, which we did. Afterwards, I remarked that I still wanted to see some green. Doug B told me that he could take me to see some green but it was far away. I told him I wanted to go, despite the trip being long. He told me to climb aboard his bus and we drove off into the distance. And during the drive, I could hear the Steven Curtis Chapman song "Long Way Home" playing.

I've been reflecting on this imagery ever since and spoken about it to one of my therapist friends. Several things have come to mind. Losing the light and warmth radiating from it is the challenge I am facing. As I considered what could be the source of the light, the scene in the Bible of Jesus being baptized came to mind. As he emerges from the water, a dove descends from the sky and a voice from heaven says, "This is my son, in whom I am well pleased, listen to Him." Both God and my dad came to mind at that point. In being baptized, I believed both my dad and God were pleased with me. I could be saved and accepted by God, which of course, was pleasing to my dad. In fact, he is the one who baptized me. By rejecting the tenets of my religion, which includes baptism, I am rejecting what gave me the Well Pleasing status, a thought that does leave me cold. It means not being good enough, not being saved, not being part of a community that continues to reinforce my Well Pleasing status,  providing me with feelings of warmth, acceptance, and being right. As a child, I was taught that being baptized was the path to salvation, essential for avoiding hell and being right with God. I was obsessed with being right, being perfect. I even worried about my baptism being performed exactly right to avoid being sent to hell. I never, ever felt certain about it. That insecurity about being saved was brought about by my own anxiety which tormented me throughout most of my Christian life. The idea of turning my back on my baptism? The thought literally leaves me cold. I even had to grab a blanket while I write this.

Another thought that struck me about this imagery concerns its similarity to The Hero's Journey* as written about by Joseph Campbell. The Hero's Journey is a common myth found in many cultures which describes how the hero handles the adventure and challenges she must face in completing some type of quest, and the ways taking on the quest transform her. The first step of the journey is called the Call to Adventure. That's where my imagery takes place. When I decided I couldn't stay at the pools of water, I could no longer remain there in the light. I had to strike out on the cold, unfamiliar path before me. My adventure involves finding the "green place" again. A place of warmth, acceptance, feeling right, feeling saved. Of course, part of what makes this an adventure is not knowing exactly where this place is, how to get there, or what could possibly create a green place in the midst of the frozen tundra surrounding me. I suspect is has something to do with leaving behind my obsession with seeking approval and working so relentlessly at being perfect, right, and saved. I suspect it has to do with self acceptance, standing on my own two feet, and being willing to risk rejection and loss of community and status.  Am I willing to walk across the frozen, dead ground, to the green space far off in the distance, without the familiar warmth of acceptance? Some of the encouraging imagery in my call to adventure was that I wasn't entirely alone on my journey. I did have family and friends accompanying me. And those of you who read this blog were there, giving me comfort in knowing I'm not alone in my grand adventure. However, ultimately, the adventure is a lonely one in that I must be the one to choose to leave behind the familiar and set off in unfamiliar territory, making decisions that no one else can make for me. This was reflected in the imagery of me boarding the bus alone. Here, I entered new steps in the hero's journey. Once the call to adventure has been accepted, then supernatural aid is given to the hero, which Doug B provided by offering the bus. Once this has been conferred, the hero comes to the next step, The Crossing of the Threshold, where she must leave behind everything known to set out on her quest. This is what occurred when I entered the bus alone and drove off toward the green space. If Joseph Campbell is right, there's much more adventure to be had (and blogged about).

*Here is a graphic depicting the stages of The Hero's Journey: 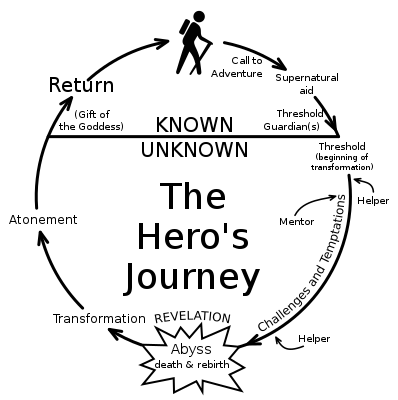