Go To Church Or the Devil Will Get You 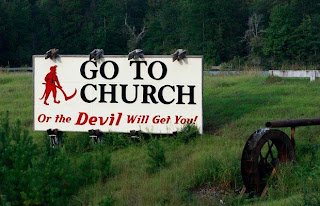 Driving home from Disney World yesterday, we saw an eye-catching billboard just north of Montgomery, Alabama. I googled it and found this photo, along with interesting news stories that have covered this billboard. It apparently has displayed the devil in his red suit for years. I decided this billboard would make the perfect segue into a series on hell that I've been meaning to do for some time. In fact, I already have a half finished post that will appear here when I finish it. I was inspired by a sermon series on hell our minister just completed and by two books on hell I've been reading as of late. In fact, I was reading one of them as we drove by the admonishing billboard. Well, it's far too late and I need some sleep before church in the morning, so I'll draw this to a close. Don't want the devil to get me!